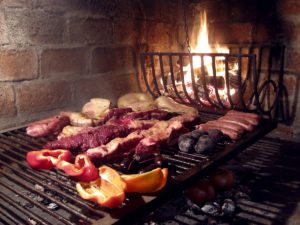 This is one of those questions that’s under continuous debate by smoke- and grill-masters. When you plan to use wood for smoking, does it matter whether or not the bark is still attached?

Some claim that it doesn’t matter, that the bark won’t impart any off-flavors at all. Others report a slightly bitter taste when the food has been smoked with bark-on wood. There’s also an in-between group that will peel the bark off if it’s easy to remove or peeling off already, but will otherwise leave it alone. Finally, there are some who say that they never thought about it either way.

In short, it’s a matter of personal taste and convenience–at least, most of the time. In some cases, leaving the bark on can be risky. That’s because bark is capable of absorbing and retaining dangerous chemicals, as well as other pollutants. The contact doesn’t have to be recent, either: Even if the chemical use has been discontinued, nearby tree bark may still contain high concentrations of residue that’s been built up through traveling airborne particles. For this reason, if you’re planning on using wood for smoking and you aren’t sure where it came from, or if you know the trees were located near a facility that uses a lot of chemicals, it’s a good idea to remove the bark before use.

Are there any other factors to take into consideration when deciding whether or not to remove the bark? As stated above, personal taste can also play a role. Some people claim that the bark can impart a slightly bitter flavor to the food, while others say that they don’t notice a difference at all. If the bark comes off easily, then by all means remove it. If it’s difficult to remove and you trust the wood source, you might want to leave it on, just to see whether or not you can taste the difference.

Finally, there are also some concerns regarding temperature control. Bark-on wood has been known to cause more flare-ups than skinned wood, owing to the volatile texture of the bark itself. This is potentially harmful to the finished product, as smoked food is at its best when the temperature remains consistent throughout the long process. While minor flare-ups are nothing to worry about, it’s something to consider, especially if the bark has significant growth due to moss or lichen.

“To bark or not to bark?” is just one of many questions in the ongoing debate on how to produce the best smoked meats around. Have fun with the experiment!

Get the best types of fire wood for smoking from the best firewood provider in the area. Give Wisconsin Firewood a call at 414-769-9663 and we’ll guide you in the right direction. We’re easy to find on the south side of Milwaukee.